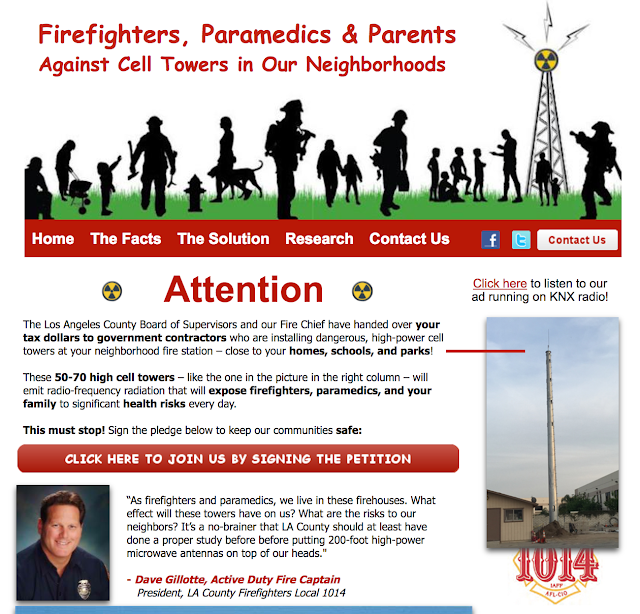 “As firefighters and paramedics, we live in these firehouses. What effect will these towers have on us? What are the risks to our neighbors? It’s a no-brainer that LA County should at least have done a proper study before before putting 200-foot high-power microwave antennas on top of our heads."

Listen to the President of Los Angeles Firefighter Union Local 1014  in this
video of his testimony to the LA Board of Supervisors. The firefighters found out cell antennae were going up on their stations through a program called LARICS

L.A. County Firefighters Local 1014
Click here to listen to a radio spot the firefighters put up on the issue of cell tower radiation.

The Firefighters won! and the towers on their stations were stopped after the testimony shown on this page. Listen to this mother speak eloquently on the topic in her testimony.

President of the United Firefighters of Los Angeles gives his testimony to the LA Board of Supervisors in this video.


United Firefighters of Los Angeles City Local 112 IAFF-CIO-CLC
Opposes Cell Towers on Their Stations.
“UFLAC will strongly oppose the use of Fire Stations as base locations for cell towers"

“ It is inexcusable that once again our firefighters in the field were the last to know about a massive 150 million dollar project that could jeopardize their health and safety. ... nobody talked to us and we have not heard from one single expert who has told us that this project will be safe.”

Download Letter by Frank Lima of the LA Firefighter Union (in video above) asks that they "cease and desist" from constructing cell towers.

If Firefighters don't want towers on their stations...why would we parents want them on our school playgrounds?

Think the Firefighters are "overly worried? " Listen to Dr. Miler speak in his testimony below.